All views here are her own, especially those of a more provocative nature.

I acquired the name of La, when certain of my friends began teasingly to refer to me as La Diva. This became shortened to La, and stuck. I quite like it, though I maintain I do not possess diva-like qualities, except when severely provoked.

This is my first blog, and I am writing with an air of disbelief. I am a true technophobe. I only have to look at a computer or mobile phone and it crashes! It's mutual hatred. I do, however, confess to owning an iPad. She is pink, temperamental, and called Margot, and we have many battles, but I do manage e-mails, and, I must admit, I love listening to audio books.

So, why the descent into blogging? It was a sudden impulse. I thought it might be a lovely way of communicating random thoughts and ideas, some of which might be helpful, and some, hopefully provocative, and that these might reach some of my many ex-students scattered all over the world, and also be picked up by some of the wonderful people I have never met, but who have been generous enough to comment, in various ways on-line, with great warmth and often very touching eloquence on my performances, live and on disc and radio.I realise there is a paradox here! If it were not for the despised internet, I would never have received these heartwarming responses. I have no excuse to offer. 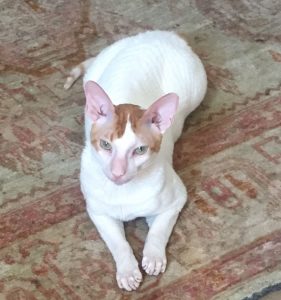 I must now introduce my cat, Leo, commonly known on social media, apparently, as Leonardo di Cattrio! His real name is Kleo Mau's Leonardo of Gatodouro. (Yes, truly! I'm not making it up, it's on his birth certificate!) and he certainly lives up to his name. He is a Cornish Rex, very beautiful, very intelligent, and very demanding, and will make the occasional appearance in these blogs.

I love cats, and was delighted to discover that one of my very favourite composers, Gabriel Fauré, was described by his friends as being cat-like in his movements, and possessing the feline qualities of charm and delicacy. He was even nicknamed 'The Cat' by his great friend Saint-Saens.


Cats have much to teach us mere pianists, and I hope to expound on this, with Leo's assistance, in future blogs. Miaow...